To celebrate our centenary, local historian David Williams wrote and published ‘Sevenoaks Preparatory School, The First Hundred Years’.  The following are excerpts from the book:

The Hollands sold The Prep to Mr Miles Jukes, a war veteran who came from a family of churchmen. He inherited 30 boys and, over the next 10 years, increased the roll to 100. A library was started, sport became more formalised, a school magazine was published and a house system was put in place. Mr Jukes’ wife died in 1933; they had no children, but Mr Jukes took in a few boarders who lived with him. In Sevenoaks, the break up of the large estates and the consequent building of houses continued. Families who moved into the large houses on the old Wildernesse and Kippington estates were attracted to the town by the availability and variety of schools. The electrification of the railway from London, completed in 1934, made the area even more attractive for London commuters. The period saw mixed fortunes for preparatory schools in Sevenoaks as some closed down, although others prospered as The Prep did.

War was declared in September 1939, and the staff and boys had to adapt to the very different restraints and conditions of war-time. At that time, there were 95 boys and eight staff. For some it was a time of excitement, for many a source of worry. Mr Jukes and Mr Morgan continued running the school while staff came and went according to the needs of the war effort. In 1942, a notable new member of staff was Mrs Agnes Lang, who was Headmistress from 1948 to 1957 and continued teaching at The Prep until 1960.

The post-war years were difficult for the country as the slow recovery from the war effort began under a new Labour government. Initially, The Prep continued under its joint principals, Mr Jukes and Mr Morgan, but in 1946 Mr Morgan left. At that time there was a total of 143 boys and 10 staff. In 1947, Mr Jukes had a road accident and was greatly incapacitated. The role of Head was taken over by Mrs Agnes Lang and she continued, supported by Mr Jukes and a number of dedicated teachers, to develop the school over the next decade. In 1946, the population of Sevenoaks had been just under 14,000 and by 1958 was approaching 17,000. Most of the large estates around Sevenoaks had sold off some of their land or been broken up, and the housing developments on land so released had continued to bring more commuters to live in Sevenoaks, attracted by, amongst other things, the variety and number of private preparatory schools for both boys and girls in the area. In 1957, Mr Jukes died and the school was purchased by Mr Kenneth Ely and his wife. Mr Ely took over from Mrs Lang as Head in September 1958.

The first ten years of Mr Ely’s headship saw The Prep develop to meet the increasing demands of education. The roll increased from between 110 and 120 (the school photo of 1960 has 113 boys and 12 staff) to 138 in 1968. The Carey Hall next door was hired to provide further space. Plays were produced regularly, school societies were established, sports day and services at a local church were begun. Outings to London and foreign holidays became a regular feature. The school magazine, The Acorn, became an annual publication. The Elys moved out of the flat at the top of the school house, which released space for a library and more classrooms. But more space was still needed and in 1967 Mr Ely began to look for alternative premises. Autumn Term 1968 was to be the last time The Prep occupied 4 Vine Court Road. By then there were 138 pupils and 15 staff, while fees ranged from £40 to £50 per term.

The school blossomed in this greatly enlarged environment at Godden Green. Extra classrooms, then a mini theatre that would be the venue of a whole range of successful plays, and then a better equipped science laboratory were all added. The concert on the lawn was reinstated in 1973. Football, cricket, athletics and cross country began to flourish and outdoor clubs were founded. In 1969, the school was divided into four houses: Vine, Weald, Knole and Seal and house competitions in work and sport took on greater importance. There was a short-lived experiment to have a few girls at the school. The school was now in the parish of Seal and the carol service and end-of-year service were held annually in Seal Church. Many boys moved on as they had traditionally done to Sevenoaks School, but many went further afield to an increasing range of senior schools. In 1977, Mr Ely announced that he was going to sell the school and retire the next year after almost a decade at Godden Green.

In December 1977, Mr Ely retired, handing the school on to Mr Edward Oatley, who came from his post as Deputy Head at Winchester House School. Mr Oatley took over 141 pupils and 13 staff. The school facilities were much the same as 10 years before, both inside and out. Soon, a new car park was laid followed by a new hall. In 1981, Mrs Rosemary Cooke, who ran a nursery school in her home in Seal, brought her children up to Godden Green and became part of The Prep. She began with 18 boys and girls under the age of 5 in a room in the recently built hall. Meanwhile, in 1983, Sevenoaks School announced that it had set up a committee under the chairmanship of the relatively new Headmaster, Mr Richard Barker, to consider the desirability of extending co-education throughout the school with the objective, if approved, of admitting 11 and 13 year old girls from September 1984.  The repercussions of this proposal were to change the face of private education in the Sevenoaks area fundamentally. In 1985, Mr Oatley and Mrs Janet Oldroyd married, marking the start of a long and successful partnership which had a major influence on the progress of The Prep. Numbers rose to 216 pupils and 22 staff in the academic year 1985-1986. That year also saw the retirement of three stalwart teachers, Mr Peter Larcombe, Mrs Angela Lucas, and Mrs Madeleine Dickinson.

Having spent almost 10 years improving the facilities and setting the groundwork for changing the ethos of the school from a largely traditional one to a family-based inclusive school, the next 10 years saw Mr Oatley dealing with the repercussions of Sevenoaks School going co-ed and schools in the Sevenoaks district closing. In 1991, The Prep took the decision to go co-educational and the first girls moved from the Kindergarten to Form 1. Overall numbers at The Prep increased steadily,

reaching 268 (including 32 girls) and 32 staff in the academic year 1993-1994. A lease on neighbouring Stake Farm was secured which came with over 6 acres of fields and, once these were cleared of stones and drained properly, allowed the school to have a better athletics track, a floodlit 5-a-side football pitch and all-weather cricket nets. By the beginning of the academic year 1995-1996, The Prep was in a strong position with an ambitious and dynamic Headmaster, experienced staff and a vastly improved environment.

When Richard Brown, who had left The Prep in 1984 to go to Sevenoaks School, came back for a year in 1995-1996 to teach Latin and Games, he found that the only familiar faces were Mr and Mrs Oatley, Mrs Mary Shefford and the part-time Mr John Pegg. Mr Oatley, however, had been recruiting carefully and, by 1995, had brought in about a dozen staff who would stay at the school for at least 10 years, plus 7 who would stay for at least 24 years. The first girls to go right through the school left in 2000. In 2000, there was a reunion for alumni, former parents and staff, and friends. Some 1400 people were contacted and over 600 came on the day.

In 1999, planning permission had been granted for a permanent building – a new hall for sport, drama, music, and assemblies – and fundraising by the school with parental support began in earnest. Mr Oatley set out in 2000 on his first overseas fundraising cycle ride and this – plus a series of events organised by the parents, culminating in a millennium ball – raised some £30,000 in 1999 to 2000 alone. The new school hall was opened in October 2001 by Graham Taylor, who had managed the England and Watford FC football teams. The number of pupils had increased by more than 100 over the 10 years to 2005, and the aim of having two classes in each year group through the school was almost achieved. This increase was mostly accounted for by the number of girls increasing from 36 in 1995 to 127 in 2005. In 2004 Mr Oatley announced that he would be retiring in July 2005 and that the new Headmaster would be Mr Oatley’s stepson, Mr Philip Oldroyd, who had been a pupil at the school in the 1980s and had been teaching at The Prep since 1994. It was the end of an era.

The period of Mr Oldroyd’s tenure saw the opening in 2009 of The Oakery, which included new premises for drama and music; the inauguration of now tradition events such as Prep Idol; and some outstanding academic and sports results. His last full year was 2010-2011, the same year that Mrs Shea, who had been Head of the Pre-Prep since 1992, retired. During her time, Stake Farm had been turned into a true family home for the Pre-Prep. When Mr Luke Harrison took over as Headmaster of The Prep in January 2012 pupil numbers were at 370. The total number of pupils went up to 386 at the start of the 2018-2019 academic year. This period saw the further development of Stake Farm, and, in 2019, the beginning of the replacement of the last portakabins by a magnificent Centenary Centre housing classrooms and a social area for the older pupils. 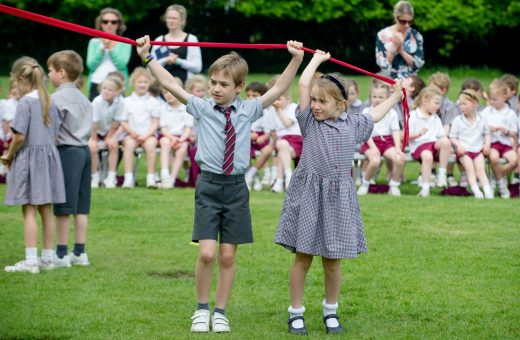 Admissions
Read More
NEWS 28.04.2022
Pupils in Art Club were really proud to be chosen as finalists for the international David...
NEWS 27.04.2022
On Friday some of our Year 8s enjoyed an afternoon of cricket in the sunshine at...
NEWS 17.03.2022
On Tuesday, we held our third annual STEAM day.  This year’s theme for the Prep pupils was...
NEWS 11.03.2022
It was wonderful to see the return of the Thomas Trophy last Friday and to welcome...
We use cookies on our website to give you the most relevant experience by remembering your preferences and repeat visits. By clicking “Accept All”, you consent to the use of ALL the cookies. However, you may visit "Cookie Settings" to provide a controlled consent.
Cookie SettingsReject AllAccept All
Manage consent

This website uses cookies to improve your experience while you navigate through the website. Out of these, the cookies that are categorized as necessary are stored on your browser as they are essential for the working of basic functionalities of the website. We also use third-party cookies that help us analyze and understand how you use this website. These cookies will be stored in your browser only with your consent. You also have the option to opt-out of these cookies. But opting out of some of these cookies may affect your browsing experience.
Necessary Always Enabled
Necessary cookies are absolutely essential for the website to function properly. These cookies ensure basic functionalities and security features of the website, anonymously.
Functional
Functional cookies help to perform certain functionalities like sharing the content of the website on social media platforms, collect feedbacks, and other third-party features.
Performance
Performance cookies are used to understand and analyze the key performance indexes of the website which helps in delivering a better user experience for the visitors.
Analytics
Analytical cookies are used to understand how visitors interact with the website. These cookies help provide information on metrics the number of visitors, bounce rate, traffic source, etc.
Advertisement
Advertisement cookies are used to provide visitors with relevant ads and marketing campaigns. These cookies track visitors across websites and collect information to provide customized ads.
Others
Other uncategorized cookies are those that are being analyzed and have not been classified into a category as yet.
SAVE & ACCEPT